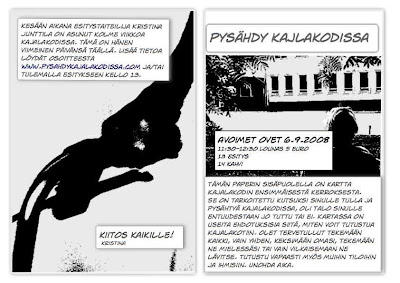 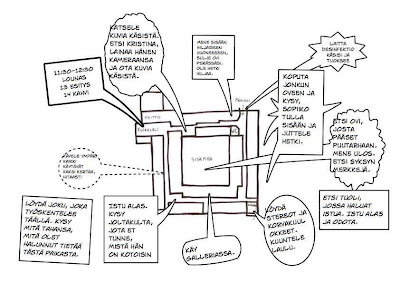 On the last day I was at Kajalakoti, there was the Open House. Surprisingly for all of us there were very many visitors. Most people got lunch and afterwards there was also coffee and cake served. In the gallery there were icons by a local artist and handicraft sold. I had made a cognitive map of the place which all the visitors got. My idea was that it could encourage people to get to know the place and maybe also see things and do things that they wouldnt have done without the map. I had made two small installations, in the library you could listen to recordings of a song from Kajalakoti and in one of the TV rooms there was a picture installation of hands. I also had a performance in the big dining room. The performance was simply made of pictures and text and it lasted a bit more than half an hour. There was hardly enough people for everybody and I got a choke attack, but apart from that it was a good experience. How to end a project which has been anounced to be a process? How to avoid longlasting goodbuys?
Posted by Kristina Junttila at 12:34 PM